Pizza inspires so many thoughts in people, especially Americans. As a matter of fact, in a recent poll pizza was listed by 15% of Americans as their favorite comfort food, twice as much as any other food. We love pizza! There are so many varieties of pizza in the world, and everyone has their favorite style. When we kicked off Hard Knox in Knoxville back in 2009 we were the first to introduce the old-world style of Wood Fired Neapolitan to our city. Since then we’ve had to adapt our style to meet the tastes of our city, but our roots of Neapolitan still run deep. The history of pizza is fascinating, and the history of Neapolitan strikes to the core of our love affair with Pizza.

Just as the wood fire oven has been around for many centuries, so has Neapolitan Pizza. Way back in the 18th century, in Naples, Italy, a man by the name of Baker Raffaele Esposito baked a pizza for the king and queen to honor the queen. He designed the pizza to resemble the Italian flag, using tomatoes for the red portion, basil leaves for the green, and mozzarella for the white. After this creation, the pizza phenomenon began! Esposito is now credited for the original Neapolitan style pizza.

There are many reasons Neapolitan Pizza is so delicious and unique, including being cooked in a wood fire oven, using all natural and fresh ingredients, and using dough formed by hand. In 1984 an association known as “The Associazione Verace Pizza Napoletana” (VPN) was created. In order to be considered true Neapolitan Pizza, restaurants must pass certain criteria and be certified by the VPN.

When Dean opened Hard Knox, he was following the criteria of a true Neapolitan Pizza, including using double zero flour for the crust, one of the VPN’s main criteria. Back in those days Dean learned that folks just didn’t love the floppier crust produced by 00 flours. So, what do you do in a start-up business when customers are giving you feedback? You adapt, and Dean did just that by slightly modifying the traditional Neapolitan dough using a high gluten flour that wasn’t 00 but would give it a little more structure and firmness. And so the Hard Knox version of Neapolitan Pizza began.

At Hard Knox, we call our version of this style of pizza the “Neo Neapolitan Pizza”. And while we have not departed much from the true Neapolitan pizza, we don’t adhere to the exact standards of VPN certification. By staying as close as possible to true Neapolitan Pizza guidelines but also catering to the desires of our customers, we are able to create that unforgettable culinary experience through pizza, that we always aim to provide. 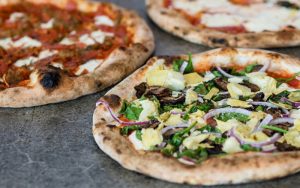 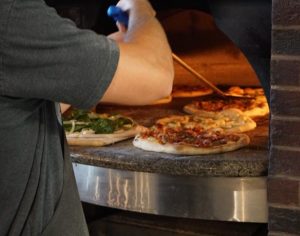 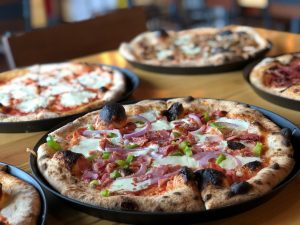