Meet the Hard Knox team! Cally Broome is the new General Manager of the Bearden location.

What is her role as the General Manger like? Cally stated it’s a little bit of everything! “My day to day I handle payroll, scheduling, ordering food, dry goods, and beer, lead pre-shift meetings, and oversee pretty much everything. So when it comes down to how things are prepared in the kitchen, to service, I’m essentially the one who makes the decisions.” Cally’s role at the Bearden location and the entire Hard Knox family is so crucial. She is most excited to take on this role because of the experience in the back of house as well as front of house and having the opportunity to learn something new.

Get to know her! Cally is a Knoxville native. Raised in the area she then went on to the University of Tennessee to study Exercise Science. After graduation Cally traveled around quite a bit. During this time she worked in and out of the food service industry. Two years after that, she decided to go back to UT and receive her Masters Degree in Social Work and a begin a career in that industry.

How’d she end up at Hard Knox? After working in the social work field for a period of time, Cally moved back to food service. About 2 years ago, while transitioning from social work to a position at another local restaurant as their Front of House Manager, Cally met Alexa Sponcia. Cally quickly realized that Alexa was doing a lot with the community and she admired the way Alexa was using culinary arts to teach youth and empower them. Their relationship grew from there. Fast forward to last spring, Cally went to Alexa for advice and ended up finding a herself with a position at Hard Knox.

What does she love about Hard Knox? Cally enjoys being in the kitchen. She spent the majority of her time in food service in the front of house. While she loves interacting with people at the front, she also really loves the opportunity Hard Knox provides her with getting to sneak into the kitchen and work back there. She really enjoys working hands on and getting to stretch the dough at times.

When she’s not working…Cally absolutely loves to wakeboard and snowboard. She is outdoorsy and can usually be found doing something of this sort. Cally is also big into Crossfit and devotes a lot of time to it. 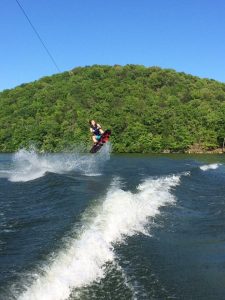 And of course, what is her favorite Hard Knox Pizza? Cally loves the Iron Mike which is a white sauce pizza with garlic, spinach, olive oil and parmesan cheese. 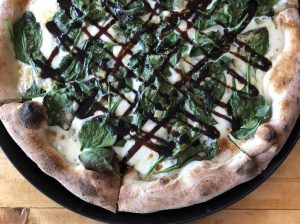